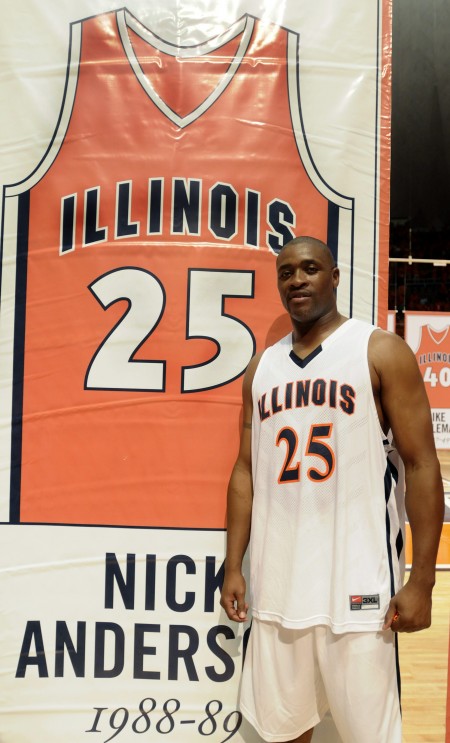 Mike Smith can’t tell you where he was when Nick Anderson hit the greatest shot he’s ever seen. It’s a little embarrassing for the Champaign accountant and longtime Illini season ticket-holder.

“We had gone to a friend’s house and ... god, do you have to write this?” Smith said. “I couldn’t stay in the room. During the timeout, I just couldn’t stand it anymore, so I got up and walked out. Then I couldn’t stand not being there, either, so I peeked around the corner at the TV.

"I couldn’t go all the way in the room. I just peeked. But I did get to see the ball thrown to Nick and then him go up and shoot it and it go in and everybody just go bananas.

“God, isn’t it amazing what you remember? One shot?”

For true orange and blue fans, it’s the man-landing-on-the-moon of shots. Years later, every one of them can tell you exactly where they were when the future first-ballot Illinois Athletics Hall of Famer beat the buzzer and Bob Knight in Bloomington, Ind., right down to the fabric of the couch they were plopped down on.

“My whole family was over at my grandparents’ house,” said Anne Cochrane, a Champaign schoolteacher and big fan. “I remember we all kind of hit the floor at the same time when Nick hit the shot.”

There was a whole lot of that going on that afternoon around Illini land.

“I was sitting right here in my chair,” said former Paxton-Buckley-Loda football coach Jerry Zimmerman, who never misses a game. “And as soon as that shot went in, I jumped up and about hit my head on the ceiling.”

Eric Meyer was tending bar at Pia’s. He’s not sure if he’s ever heard the place louder.

Bill Hancock let out a scream from his Tuscola den that his buddy, Bill McCarty, might have heard all the way in Chicago, where he caught the fantastic finish with his son. The two have seen some doozies in their 50 years of Illinois basketball watching ... Bob Starnes’ prayer at Northwestern in 1963, Eddie Johnson’s jumper against Michigan State in ’79, Andy Kaufmann’s bomb to beat Iowa in ’93 ... but Anderson’s shot might top them all, Hancock said.

KNIGHT: HE 'JUST TURNED AND THREW IT AT THE BASKET'

Ed Hightower was somewhere in the vicinity of center court at Indiana’s Assembly Hall. The lead official, he’s the one who put two seconds back on the clock after Jay Edwards tied it with a circus shot of his own, though he didn’t think it’d mean anything.

“I don’t think there was a person in that arena that thought Anderson could get that shot off,” Hightower said.

Lowell Hamilton was standing a few feet from Anderson, whom he helped free up with a pick. He’s never been one to argue with officials, but in this case, he must take issue with Hightower.

“Once the ball got in Nick’s hands ... and you could probably ask anybody on the team ... I honestly don’t believe anybody doubted that he was going to make that shot,” Hamilton said. “He’d done it too many times.”

Knight was stewing on the Indiana bench. Sorry to disappoint you, Illinois fans, but he’s seen better.

“I once saw Edwards shoot the ball 47 feet to beat Michigan,” Knight said. “I mean, just take a shot. Anderson just turned and threw it at the basket.”

Stephen Bardo was all the way down at the other end of the floor. The former high school quarterback, whose 60-foot inbounds pass hit Anderson on the numbers, doesn’t know what shot Knight’s thinking of, but it wasn’t Anderson’s.

“I threw a baseball pass, and Nick faked like he was going to the basket and he came back, caught it, took a dribble and shot a jump shot,” Bardo said. “That’s what people don’t remember. From that place, people usually shoot a set shot. He jumped. His feet were about 3 feet off the ground, he shot it and it hit nothing but net.”

Ervin Small was on the edge of his seat on the Illinois bench. He can back up Bardo’s account of the play.

“The guru, Knight, played it wrong,” Nagy said. “They’re not going to criticize him because everybody thinks he knows everything. But Bardo had an open pass. All Nick had to do was break off a couple of screens and catch the ball. Couldn’t have happened at a better place.”

Lou Henson was saying a Hail Mary on the Illinois bench. The play worked so well that afternoon, he used it again four years later.

“Andy Kaufmann beat Iowa on the same type of play, except it wasn’t that far out,” Henson said. “I remember one of the Iowa announcers said, ‘Well, Iowa’s never won a more exciting game than this one,’ then Andy knocks that down and we win it. The very same play. We set a double pick for him, he got it and he scored. Usually, they don’t work like that.”

Orville Holman was sitting a few rows behind the Illinois bench. The past president of the Rebounders Club, who did a few rings around the Rosary himself that afternoon, is proud to say he was there, one of the fortunate few Illinois fans to see it in person.

“I held my breath for about the last four minutes,” Holman said. “No, literally. We were sitting there praying. It was so exciting to be there among the people that witnessed the thing. We were a small group.”

Jim Turpin was watching from his seat on press row. You could hear his call — ‘Illinois wins, Illinois wins’ — from the cheap seats.

“Absolute silence, as I remember it, except for the few people from Illinois,” Turpin said. “It’s quite a sight to see all the players jumping all over Anderson. It was just a pileup of players. I was hoping somebody didn’t get hurt. And then Knight walking off the floor with his head down.

“It was a memorable time down there.”

ANDERSON 'MY MOM WANTS ME TO GET MY DEGREE’

For all the thrills the Flyin’ Illini provided, the 1989 season ended with a punch to the gut.

A week after a loss to Michigan in the Final Four, a record crowd of 725 went wild when team MVP Anderson announced at the team banquet that he’d be back for his senior season.

“I’m coming back. No doubt about it,” he said. “My mom wants me to get my degree, and you’ve got to please your mom.

“I hear people say, ‘Is Nick leaving?’ Who made up that rumor? I’m looking forward to playing next year.”

Small, his best buddy since their days together at Chicago Simeon, didn’t believe him for a second. Anderson’s mother, Alberta, had suffered serious injuries in a car accident in January 1989 and was unable to return to work, the reason her son gave a month later when he announced he was going pro.

He waited until the last possible moment to mail his letter of application to the NBA.

“A girl I was dating in college typed up the letter Nick sent to the NBA,” Small said. “It had to be postmarked by a certain day, but he was afraid to drop it in the mailbox. I remember, we were in front of the Armory on Peabody and Fourth Street. It was a Sunday. His big thing was, ‘What’s Coach Collins going to say? What’s Coach Collins going to say?’

“Finally, I snatched it out of his hand and threw it in the mailbox myself.”

Collins didn’t mind, but Henson wasn’t happy. Even though Anderson was a lottery pick and made millions of dollars and enjoyed a long, prosperous pro career — scoring 11,529 points in 13 NBA seasons and being inducted into the Orlando Magic Hall of Fame — Henson thought he could have done better for himself had he stuck around another year.

“Had he come back that next year, he would have scored 25 to 30 a game,” Henson said. “He was that good. But we didn’t need him to score because we had (Kenny) Battle and other people.

“If he came back, he would have gotten three or four times the money he did. I don’t think NBA people knew how good he really was.”

The Illini weren’t the same without him the next season. They won 21 games, swept Indiana and finished in the upper half of the Big Ten but were one and done in the NCAA tournament, losing to 12th-seeded Dayton in Austin, Texas.

The year after that, they went on probation.

“I’m just sorry he left,” Kendall Gill said. “Because if he hadn’t left, we’d probably be talking about a national championship.”