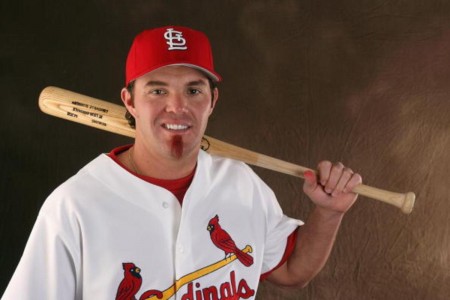 Coming this fall to the campus where Mom and Dad first became an item: Cody Spiezio, son of the only Illini with World Series rings from two different franchises.

And Scott Spiezio wouldn’t want it any other way.

“I proposed to my first wife under the Eternal Flame on the Quad in 1994,” Spiezio says. “Although we were divorced in 2005 after 16 years together, we have three beautiful children and remain close.”

Before embarking on a 12-year major league career that would include stints with four franchises, 996 hits and one unforgettable three-run blast in Game 6 of the 2002 World Series with the Angels, Spiezio hit .303 with an Illini career record 48 home runs from 1991-93.

His fondest memories from those days?

“I’d say Custard Cup was my favorite place, although I ate a lot of Papa Del’s and Garcia’s Pizza as well.

“I remember a lot of great people and professors. Of course, my teammates were the most memorable. Twelve of us are on a group text and talk about every day.

“Dave Wohlwend was a teammate for two years down there and also a lifelong friend. We played and went to school together since we were 5 all the way through college — except his freshman year, when he went to Mankato State University. It was great when Itch (Jones) and Dan (Hartleb) brought him over to the Illini.

“Dan Hartleb let me speak to the team last spring in Minnesota at my friend Dave Wohlwend’s home. I am friends with Itch on Facebook and learned a lot from him.

“I also remember I had Lou Henson’s daughter as my speech teacher. She was great and helped me a great deal."