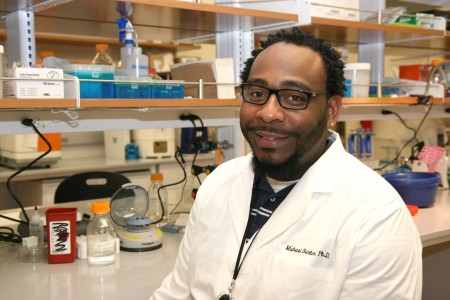 If not for a helping hand from the woman affectionately known as “Auntie Pam” and friends, Michael Burton isn’t sharing this happy memory of his time in Champaign-Urbana.

“U of I was my dream school and I wouldn’t have been able to be there without the efforts of Pam Greer and everyone in the LAS bridge transition program,” says Burton (BS ’06, animal science/chemistry; Ph.D. ’12, animal science, integrative immunology and behavior).

“The program gave me — an underrepresented minority with a low class rank — the opportunity to prove that I belonged at U of I. And with that shot, I left the University with both a BS and Ph.D.,” Burton says from Dallas, where he’s an assistant professor in the Neuroimmunology and Behavior Lab at the University of Texas’ School of Behavioral and Brain Science.

“‘Auntie Pam’ and the crew really inspired me to be the best I could be while urging me to reflect on my learning experiences.”

Away from the classrooms and labs, Burton spent many a night at Illini Tower — “a certified private housing residence hall” and home for him for seven of his eight years on campus.

“Back when I moved in, it wasn’t as expensive and then I became an RA, then the RD,” he says. “I really grew up there.