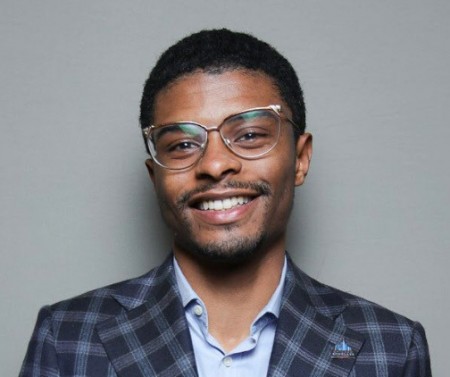 In the four years since he graduated from the Gies College of Business, Crain’s Chicago Business has named him to its 20 In Their 20s all-star team, Chicago Scholars featured him among its 35 Under 35 honorees and Medium called the business he co-founded one of the "Seven Black-led startups in America that are Shifting the Culture."

And for all that, Rapunzl Investments co-founder and chief operating officer Myles Gage has a few faculty members to thank.

The 2016 finance grad takes it from here.

“Roger Cannady's Real Estate Development class was one of my favorite classes at U of I primarily because a different Chicago-area real estate developer would speak to our class during nearly every session," Gage says. "I found the class to be truly engaging as real estate development remains a passion of mine and we truly got first-hand access to some of the major players in the game.

“George Krueger taught a Financing Emerging Businesses class which I also found very useful and practical as I would go on to co-found Rapunzl Investments the summer following senior year in 2016 and was able to apply several concepts learned in class to my actual business.

“While I did not have any class with Jewell or Tiffany White, as one of the few Back men in the Gies College of Business, I felt that they kept an eye on me and made sure I made the most of my experience on campus and truly encouraged me to be involved on campus.

"Additionally, they allowed me to attend an abroad program in South Africa during winter break of my junior year, which was my first-ever international trip. Seeing the business landscape outside of the U.S. really opened my mind to the possibilities of having an international footprint, especially in markets that are emerging but are not as robust as the United States.

“Mark Wolters' Intro to Marketing was another class that was not only innovative and engaging while attending, but also very useful when developing an initial business plan for Rapunzl and thinking about angles to penetrate various markets.

“While I encountered many professors and faculty members during my time at U of I, I believe the aforementioned individuals were truly integral in how I view myself in as a leader in business today and where I envision myself in the future."