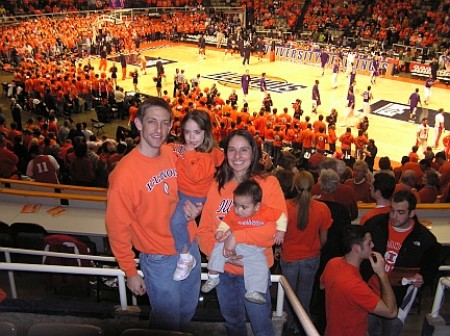 LA-born, LA-raised and LA-educated, Paula Welander didn’t know what she was in for when she and her fellow grad student husband moved to C-U.

“As a first-generation student and the daughter of Mexican immigrants, this was big move for me — one I would not have been brave enough to do without the support of my husband, Paul, who was also pursuing his Ph.D. at Illinois but in physics,” Welander (’07, microbiology) says from Palo Alto, where she’s an assistant earth system science professor at Stanford.

“Both of our kids were born at Provena hospital in Urbana while we were students there and we bought our first home ever in Champaign. And then there were the winters! My goodness, the winters were a shock to this Californian.

“To top it off, we were avid Illinois basketball fans and our time at Illinois overlapped with that amazing 2004-05 basketball season. We even named our son Daniel after our favorite Illini, Dee Brown. So yes, there are many, many aspects about my time at Illinois that make it a very impactful and cherished time in my life.

“But nothing compares to the wonderful people we met while at Illinois. And if I have to choose just one that impacted me as a scientist, it would have to be the wonderful microbiologist Ralph Wolfe.

“Dr. Wolfe is a world-renowned microbiologist who studied, among many things, how microscopic organisms, known as methanogens, are able to produce methane gas and through this process are able to gain energy for growth.

“When I started my graduate work in the microbiology department at Illinois, Dr. Wolfe was an emeritus professor and was in the process of shutting down his research lab — a semi-retirement as he ended up in an office and with a bench in the research lab of my advisor, Bill Metcalf.

“At Illinois, I took up a project that was focused on the same microbes that Dr. Wolfe had worked on. So having Dr. Wolfe nearby was both intimidating and very exciting. And while Dr. Wolfe taught us students a lot about the biochemistry of methanogens and the skills necessary to do rigorous science, what I remember most about him is his kindness.

"And he was always open to any question you brought him. There was never a dumb question when talking to Dr. Wolfe.

“I try every day, now as a professor with my own research lab full of graduate students and scientists, to be as open and kind as Dr. Wolfe was to me. Dr. Wolfe is truly a UIUC treasure and I was fortunate to have interacted with him during my graduate years.”