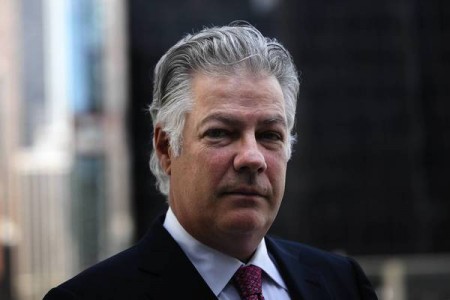 Terry Lavin ws destined to write for a living. He had his career path all planned out — get a bachelor’s in journalism (he did, in 1977) and go on to critique music at Rolling Stone.

But a funny thing happened on his way to becoming the kid from “Almost Famous.”

Lavin — or should we say, his Honor — tells it:

“My first assignment in Journalism 101 was to rewrite a game story for the historic six-touchdown game of the Galloping Ghost (Red Grange). My professor, Lynn Slovonsky, grabbed me for a quick chat after he had graded the submissions.

“‘This is always my first assignment, and your article is one of the best I’ve seen. You’re going to be a great writer but have to promise me that you won’t go to Law School. We lose some of our best that way.’

“With my long hair secured in a tight ponytail, I shook my head and reassured him that my career goal was to work at Rolling Stone.

“I did my stint as a rock critic at The Daily Illini and eventually betrayed my mentor’s advice, as I spent 27 years practicing law. I do write for a living now — as a judge in the Illinois Appellate Court.

Looking back now, Judge Lavin can’t say he doesn’t miss those days, especially all the nights he spent at one particular former Champaign concert venue.

“I had a number of great evenings at the Ruby Gulch, where I saw acts as diverse as McCoy Tyner, Asleep at the Wheel and Jimmy Buffett,” he says. “The room held about 180 spectators, many of whom were pretty well baked.

“The aroma of pot clung to the paneled walls, which caused the legendary saxophonist Rahsaan Roland Kirk to threaten to cancel his performance because ‘this place smells like a joint, and I don’t play joints anymore.’”