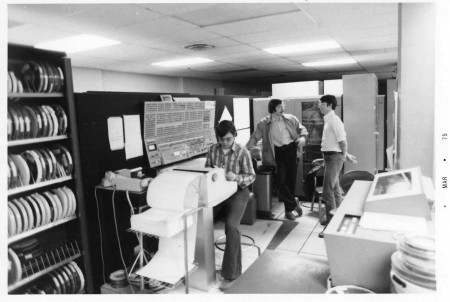 By modern standards, the computer Tom Starr worked on as a UI student was a relic.

“Today,” the DSL pioneer says, “the phone in my pocket has more computing power than that monstrous IBM 360.”

But back in the 1970s, getting to work on the “Big Iron IBM” — as Starr knew her — was a treat afforded few others anywhere on the planet. (That’s him in the center of the photo).

“Many of my memories from the University of Illinois stem from the Digital Computer Lab,” Starr (BS ’75, electrical and computer engineering; MS ’76, computer science) says from Chicago, where he’s a lead member of the technical staff at AT&T Labs.

“I was captivated by computers from the first time I saw what they could do at the U of I Engineering Open House. As a computer science graduate student, I served as the chairman for the CS department’s exhibit at the open house.

“My long hours at the DCL was fueled by snacks from the coin-operated snack machine in the basement of the building — it was more like a casino slot machine because sometimes I would get no snack and other times I would get three snacks for the price of one.

“I am not the only one who feels DCL is a historic landmark. When the building was expanded, the architect left the original building unchanged and built a new building that encompassed the original DCL structure.

“Inspired by the 1970s Plato project at the U of I, I wrote the novel ‘Virtual Vengeance’ (available on Amazon), where a U of I professor of computer science discovers that everyone is being brainwashed by our electronic devices.  The villain behind the plot murders the professor, only to find that the professor had created a new virtual form of life. The new virtual entity is much harder to kill and it is vengeful. The story explores what distinguishes man from machine.

“Today, I serve as the chairperson for a United Nations-sponsored technical committee and as president of the Broadband Forum, an international association of 150 telecommunications companies, on behalf of my employer, AT&T.”