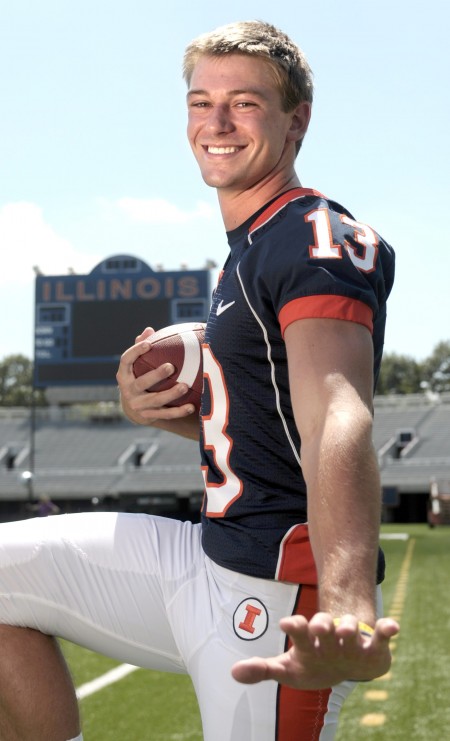 Derek Dimke spent one of his jolliest holidays with 85 or so of his closest friends 950-some miles from home.

The time: Christmas Day 2010. The place: Houston, where the most accurate field goal kicker in school history and the rest of Ron Zook’s second-to-last Illini team were matched up against Baylor.

As memorable as the game itself was — the 2012 finance grad and now-LinkedIn relationship manager nailed three straight field goals to give Illinois an early lead it would never relinquish in a 38-14 rout — what happened four days prior was every bit as fun for Dimke and friends.

“We arrived in Texas on Christmas Day, got settled and couldn’t find much to do. After some searching, there was only one bar we could find open on Christmas Day. Of the 100 or so guys that made the trip to Texas, I’d guess 85 of them ended up at the same bar celebrating and having fun.

“We were the only people in the entire place, and it ended up getting pretty wild. At one point in the night, a few Baylor players showed up, looked around, tried to order a drink — we obviously made it difficult for them to do much of anything — and left after about five minutes in the bar.

“I think we had a midnight curfew — and ended up rushing back to the hotel five or 10 minutes before curfew. Coach Zook was sitting in the lobby of the team hotel watching nearly the entire team get out of the back of four or five cabs minutes before curfew — his arms crossed, shaking his head. Everyone knows that Zook pose where his arms are crossed and he is looking into your soul.

“It would not have been a good look for the entire team to miss curfew the first night in Texas. It was a great bonding experience for the team, one of the best Christmases I’ve had — and a few nights later, Coach Zook led us to a solid win.

“After the game, we repeated the bar trip, and this time went to Kam’s when we got back to Champaign.”