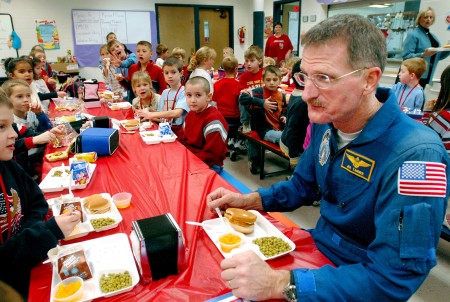 One of the most highly decorated Illini student-athletes of them all competed in a varsity sport that hasn’t been around in more than two decades.

“We trained and held meets in the Huff Pool in Huff Gym” for his three years on the team, Tanner says. “It wasn’t a great pool, but we called it home.

"A few of us enjoyed jumping off the top rail of the viewing stands, much to the chagrin of the coach.”

One of 14 Land of Lincoln-born astronauts — and the only one from East Central Illinois — the 1968 Danville High grad put in 8,900 hours in Naval and NASA aircraft. That includes seven spacewalks and four shuttle trips — with the first (in 1994) and last (2006) both aboard Atlantis.

Since 2008, the son of longtime Danville physician L.W. Tanner has served as a senior instructor in the University of Colorado’s Aerospace Engineering Science Department.

JEFF D'ALESSIO FROM 2020: 25 things you should know about one of Danville's favorite sons
PHOTO GALLERY: Masked Illini past and present