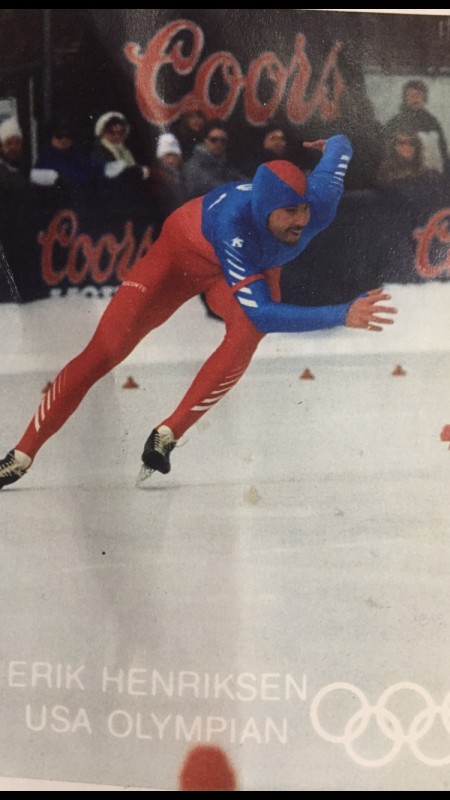 Erik Henriksen was born an Illini.

Dad Harry was a two-degree alum himself who went on to a 30-year career as curator of exhibits at the Natural History Museum.

“We lived on campus my whole early life — first at 206 East White Street and from 1962 to 1988, family home at 103 East Chalmers,” says Erik, an Avery Brundage scholar who earned his master’s in journalism from the UI in 1998, following a speedskating career that included three Olympic teams, three U.S. sprint championships and two medals at the World Championships.

“I had the run of the campus, what with hunting pop bottles for two cents apiece with my older sister Alicia, to support her Barbie doll collection, my Matchbox car hobby and our candy addiction. We turned them in at the Sinclair Gas Station, later to be the Red Lion Inn, and later at Rusk’s grocery at Fourth and Green.

“Later, at seven years of age, I began my skating career, and spent countless hours at the U of I Ice Rink, which also included horsing around at the Armory.

“All the while, everyone in the family participated in Henriksen Ceramics. This got my sister, me and my little brother Niel into every fraternity, sorority, independent house and certified dorm at the time as deliverers of samples of Mom and Dad’s day cups and beer steins to our client base, the U of I students.

"Our garage was dedicated to a giant kiln that we fired our hand decorated products.  My mother Jeannine tended to billing and production aspects while being the skating mother to three spirited children.

“At 10, I began my career as a Champaign Urbana Courier newspaper boy, and received the highest per paper rate due to the uncollectable nature of my student route. Soon, I learned the time to collect was Saturday and Sunday mornings, because my clients were home and partying still or hung over. So, I was in yet more homes,residences and apartment buildings. I knew every crack in the sidewalks and every dog to avoid.

“K.D. Wilkinson ran a rooming house with meal plans on my block on Second Street and he would invite and make me Saturday or Sunday breakfasts after my route. This also came with sage elder advice. My most famous customers were nextdoor neighbor and U of I basketball player Dave Scholz and over on Stoughton Street lived U of I player Nick Weatherspoon.

“I was a gamer and was proud of my pinball prowess from the Armory House to the Six Pack to the K-Room at the University YMCA and also the Illini Union.

“The Co-Ed Theater was where a kid could get a summer movie pass and go to two movies a week for a quarter a piece. I would buy my plastic car and airplane models and kites at McBride's Drugs on Sixth and Green.

“It was fun to walk anywhere we wanted on the U of I, enter any building, go to PLATO computer lab, the Undergraduate library magazine section and the Krannert Art Museum.

“My aunt was personnel manager at the Illini Union, and it meant a Christmas job for the Henriksen kids.

“My friends and I played pickup softball and basketball games at Washington Park and the fully accessible tennis and basketball courts and fields on First Street.

“I witnessed the building of the Assembly Hall and Krannert Center, and saw the demolition of many beautiful homes in my neighborhood and throughout campus.

“When I got older, I attended many a concert at the Assembly Hall, and also Red Lion Inn. Later, I would become an Olympian and be sponsored by the Red Lion’s most favorite sons — REO Speedwagon.

“Sadly, the campus has lost its residential architectural uniqueness. No longer do professors and administrators live on campus near the students.

“In spite of the skating and the multiple jobs, I got a public school education and took the ACT test and got accepted to the U of I, but opted to go to Parkland. Skating dictated I finish my bachelor’s at the University of Wisconsin-Milwaukee.

“Later, I would be accepted to the U of I College of Law, but decided against that career path.

“When I was 40, I took the GRE and was accepted to the now College of Media, and at last earned my first degree from the U of I — a master of science in journalism. I am forever grateful to the personal attention of professors Bob Reid, Eric Meyer and Walt Harrington.

“These are some of the events, people and places that I fondly remember the U of I at its best, and they are delightful to recall and are gone. This was referenced in Thornton Wilder’s play, ‘Our Town’ — For some of us, this means you can’t go home.

“Perhaps if the U of I builds an international-dimensioned ice arena that supports figure skating, hockey and short-track speedskating at the highest level, it might be possible.”