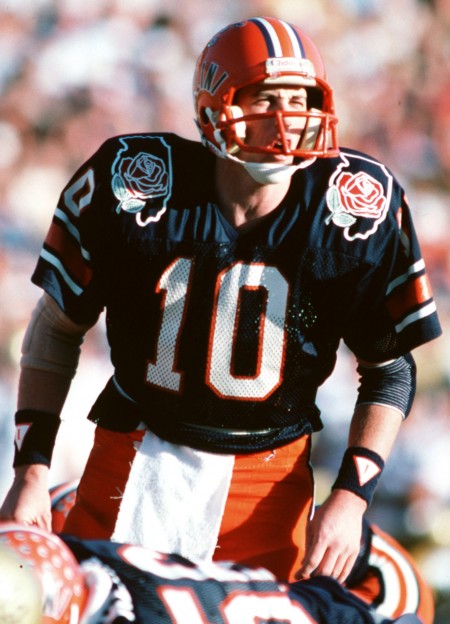 It was a whole different college football when young Jack Trudeau — a highly-rated high school quarterback prospect at Livermore (Calif.) Granada — was being courted by coaches in the early ’80s.

“Recruiting was very different back then, too,” he remembers.

“I had gone to Illinois my first weekend out of six potential visits. Obviously, I loved it. The second week, I went to UCLA. I enjoyed that weekend, but still had Illinois as my No. 1 school.

“Arizona´s head coach came to my house for an in-home visit on the Monday before I planned to visit there. But then, on that Wednesday, the coach recruiting me called and canceled my visit. I rescheduled and went to Colorado instead.

“The following Monday, after my Colorado visit, the same coach from Arizona called back and apologized that they made a mistake and had canceled my visit without watching my film.

“They had heard during the weekend that I went to Colorado and realized they had messed up. They had more than a dozen quarterbacks in and realized I rated higher than all of them.

“By the time he had called back, I had basically committed to Coach (Mike) White at Illinois. Arizona was on top of my list before my trips, but of course, after my Illinois visit, I´m sure Arizona had no chance. I made the right choice.”

A second-round NFL Draft pick of the dreadful Indianapolis Colts, Trudeau played 10 seasons for three teams, throwing for 10,243 passing yards with 42 touchdowns, 62 interceptions and a 63.3 passer rating in 67 games.

He remains No. 1 all-time on Illinois’ career passing list, throwing for 8,725 passing yards, twice earning All-Big Ten honors and, as a first-year starter in 1983, earning the distinction of being the only quarterback to beat all nine Big Ten opponents that made up the conference in those days.

“Each bowl experience was different,” he says. “Alabama was pure fun. I was a redshirt and got to travel in the main travel party and hung with Tony Eason the whole week. We had our own police officer assigned to us and he was awesome.

“The second game was the Rose Bowl. I didn’t have as much fun because there was a lot of pressure and we went to win but the experience was amazing.

“Third was the Peach Bowl. After a disappointing (6-5-1) season and my senior year, that was difficult. Playing Army in that game felt like a letdown. No offense to Army — they played great.”