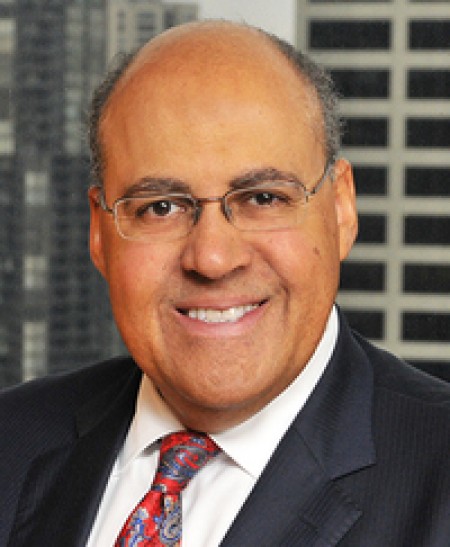 Little did Graham Grady know what — or who — awaited him when he was elected a student representative to the UI’s board of trustees.

Let’s just say that all that’s happened in the four decades since — the law practice, the stint as CEO of the Chicago Housing Authority, the seats on the boards of the Chicago Symphony Orchestra and the city’s public library and parks foundations — were all influenced by that one-year trustee term in 1979-80.

“People frequently reflect upon the impact a particular person has had upon their life,” Grady says from Chicago.

For him, that person was the late, great Earl L. Neal.

“At that time, Mr. Neal was completing his 12-year tenure as a trustee," he says. "He had served with distinction and, among other things, was the first African-American to serve as chair of the U of I Board of Trustees. Mr. Neal lead the board with strength, poise, character and, when circumstances called for it, a bit of humor as well.

“I remember my first event as student trustee. I had a huge Afro. For those who don’t know, an Afro is a hairstyle popular among blacks in the late ’60s and ’70s featuring long, puffed-out hair. My Afro was at least 6 inches high. I also sported a goatee.

“My physical appearance was off-putting to many of the older, white trustees, as many of them were not accustomed to being around people who looked like me.

"Well, to smooth my transition onto the board, Mr. Neal told all of the other trustees that he knew my parents from Sunday school at a church in Chicago years earlier, that I was from a good family and that ‘underneath all of that hair’ was a fine young man who would be an addition to the board.

“It worked. With that introduction, I had instant credibility with the other trustees. I have Mr. Neal to thank for that. A student trustee serves a one-year term, so it is important to quickly establish rapport in order to be effective in representing student opinions and perspectives on issues facing the board and the university.

“In the context of the times, Mr. Neal faced discrimination when he arrived on campus as a student in 1945. The Jim Crow era was alive and well. Upon arriving in Champaign, Mr. Neal and his father went to a restaurant and ordered some hamburgers. When the food arrived, it was in a paper bag. The message was clear: you can buy food here, but you cannot eat in this restaurant.

“It’s amazing that he even bothered to give back to the university later in life in view of the treatment he received on campus as a student. But magnanimity was part of his character.

“Mr. Neal received his BA from the U of I in 1949 and his JD from the University of Michigan in 1952. He served briefly in the Army. In 1955, he began to practice law in his father’s law firm in Chicago. Mr. Neal went on to have a prolific career in the law and in the civic life of Chicago.

“During his tenure on the U of I Board of Trustees, he helped guide the debate on minority student recruitment into the Medical School. He was always respectful of students who voiced their concerns to the board. Mr. Neal had a certain characteristic which made people feel respected and that their opinion mattered. Mr. Neal exuded the calm and confidence which put others around him at ease.

“Many years later after I had also become a lawyer, I had numerous occasions on which to interact with Mr. Neal. He was always helpful to me. I had the good fortune to observe Mr. Neal on a variety of occasions and a range of venues. He exercised the utmost  professionalism in every setting.

"Mr. Neal worked quietly and effectively behind the scenes to achieve good outcomes for his clients, the city of Chicago and the University of Illinois. Mr. Neal was an indefatigable champion of justice and fairness of opportunities for minority inclusion.

“I often reflect on the fine qualities and good character of Mr. Neal. He was one in a million. I am fortunate to have known him.

“At the memorial service for Mr. Neal in February, 2005, soon after his passing, Chicago Mayor Richard M. Daley provided a eulogy stating, ‘Earl Neal never let us down.’ Mayor Daley praised Mr. Neal for all he had done for the city, dating back many years including during the tenure of his father, Mayor Richard J. Daley. Mr. Neal’s influence and impact was known far and wide. Mr. Neal was widely respected and highly regarded by all who knew him.

“Shortly after his passing, the U of I erected a memorial dedicated to Mr. Neal. The memorial is located at the southwest corner of Roosevelt and Halsted and it bears a plaque in his honor.

“In a sense, I am still learning from Earl Neal even today. I am grateful to the University of Illinois for affording me the opportunity to know Mr. Neal and to learn from him. It was an unexpected and highly valuable part of my education.”