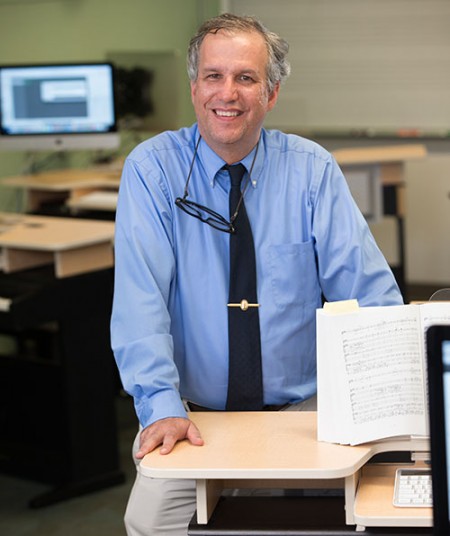 All in all, good work.

As compliments go, James Bohn has heard better. But considering the source (the renowned Lawrence Gushee) and the stakes (doctorate in music composition), it ranks among his favorite pieces of feedback.

Bohn takes it from the top:

“When I was working on my doctorate, my minor was in musicology. I wanted to do an independent study on the film music of Bernard Herrmann,” he says from says from Easton, Mass., where the two-degree UI grad directs the music program at Stonehill College.

“I asked Pamela Potter if she would oversee my study, as we already had a good working relationship. She remarked that I should do my study under Lawrence Gushee.

“Professor Gushee had a reputation for being very tough, and was not the type who would suffer fools gladly. Thus, I was more than a little intimidated.

“When I approached Professor Gushee with the idea, he remarked that he didn’t really know much about the topic, but he was probably the best faculty member for the project. We would meet in his office, which was filled with bookshelves, and his desk and most of the chairs were willed with stacks of books.

“Our meetings were valuable, but somewhat informal. He would often come up with a bit of knowledge off the top of his head, and would double check it with a book or other source in his office. For instance, he asked me if I had checked the RKO archives, adding: ‘I think they’re at UCLA.’

“His seemingly comprehensive knowledge and sharp mind pushed me to do the best work that I could do at the time. When he handed back the paper I had written as a culmination of the semester’s work, it was covered in red like no other paper I had every written.

“However, at the bottom of all of his comments was the statement, ‘All in all, good work.’  Those five words seemed like the most laudatory piece of feedback I got during my years at UIUC, as I really felt I had earned it.”