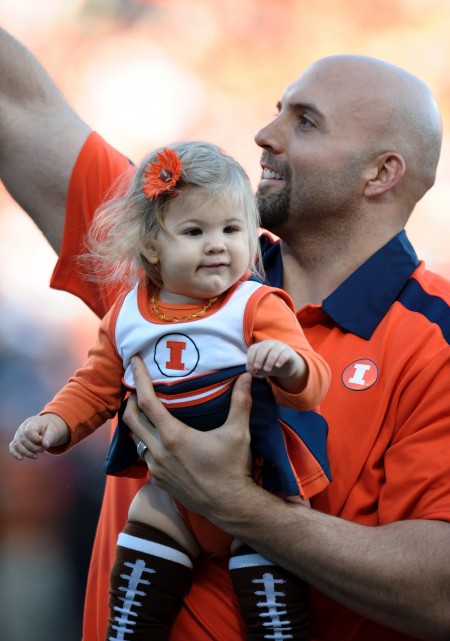 The secret to pancake-blocking four-year starter Tony Pashos’ on-field success along the offensive line at Illinois?

Hint: It comes in a 20-ounce cup and isn’t allowed on any diet we're aware of.

“I believe all the countless days I spent at Custard Cup is the reason why I was successful," Pashos swears. "Something about putting away a giant 20-ounce Snowstorm made me bigger, fatter, stronger, so that I can be the best Fighting Illini football player that I could.

"Too much of a good thing could sometimes be bad, and in case I didn’t make weight for the week, I would make sure to go when all the coaches were in their meetings in case I ran into them. Custard Cup also had the power to brighten my day, make me smile when I was down, and let me know everything will be OK in life — as long as I had a giant 20-ounce Snowstorm.”

Pashos is such a fan, the NFL veteran joined the all-star team of investors that purchased the West Kirby Avenue landmark from Doug and Christy Jarling in 2016, joining a former teammate (QB Kurt Kittner) and head coach (Ron Turner), among others.

“I realized my Fighting Illini wife, Michelle, would be ‘the one’ after our first date to Custard Cup because she too ordered the same exact giant 20-ounce Snowstorm as me,” Pashos says. “Nowadays, when we visit campus with our family, it is on the list of places we must visit.”