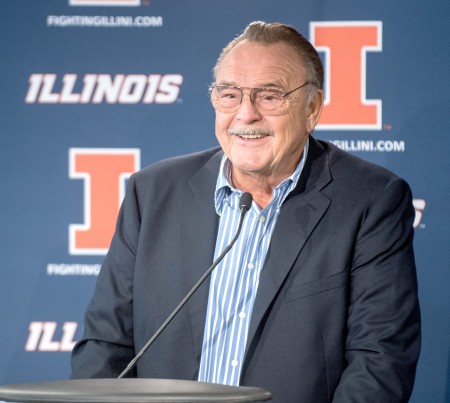 “It’s good to be back home,” No. 50 announced in September 2017 upon being the first inductee in the first class of the Illini Athletics Hall of Fame.

Then, the linebacker who used to make opposing quarterbacks quake in their cleats did something out of character, given his fearsome past.

“Jesus, I’m going to get through this,” he said.

The crowd ate it up, just like they did during all of his other induction ceremonies — including the big one in 1979 in Canton, Ohio, when he was enshrined in the Pro Football Hall of Fame and devoted a big chunk of his speech to his alma mater.

“I sincerely thank you, Pete Elliott, for giving me the honor of being my presenter, and secondly for the instrumental part you played as coach at the University of Illinois. To be truthful, I dreamed of being a great football player as far back as I can remember. I decided to take one step at a time and wouldn’t settle for less.

"I knew God had given me the physical aspects needed, now it was up to me. So I began to follow my career and my dream first at Chicago Vocational High School and after meeting and being coached by Mr. Bernie O’Brien I knew I had meant something special. ...

“Then I went up to the University of Illinois. Was starting to gain confidence in myself as a football player and with the many hours of help from Coach Bill Taylor and the Hall’s own Pete Elliott, the Illini went on to win the 1964 Rose Bowl. The Rose Bowl, as it turned out, was the only major postseason game I participated in my whole football career. Thank you Bill Taylor and Pete Elliott for being an important part of my life.”

The 74-year-old Chicago Bears legnd, who did some acting after retiring from football in 1973, makes his home in California and doesn’t get back to the UI often. The scenery in Campustown has changed quite a bit from his days here, from 1962-64, he noted during his September return.

“Just a little bit,” Butkus said. “We didn’t have all this (Grange Grove) when I was here. It was a little lean until we won the Rose Bowl. The effect of winning is there’s always a following.”

Butkus is also a fan of second-year Illinois coach Lovie Smith, whom he’s known since Smith’s days leading the Bears.

“These kids all think they’re gonna go to the pros coming out of high school, so why wouldn’t you go to a place where the coaches have the most pro experience probably out of all the coaching staffs in the country,” Butkus said. “I think it’s a big plus to have him here. It’s going to be the place to go (for recruits).”