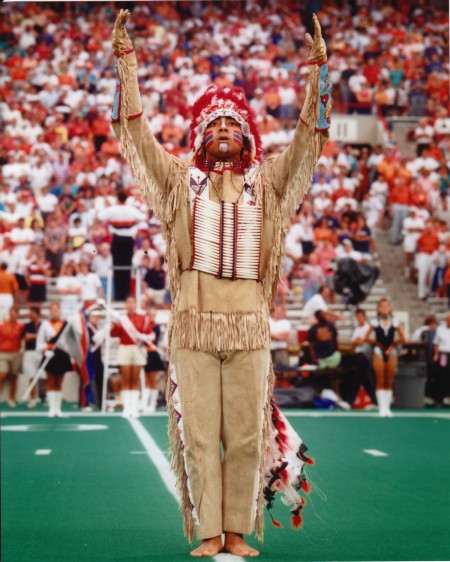 Here’s Chief No. 29, Steve Raquel, who keeps a campus presence as an adjunct lecturer in the College of Business:

“My first football game performance was versus Northwestern in November 1990, traditionally the last game of the season. It was given to the assistant, which I was at the time. In anticipation, I let everyone I knew know that I would be performing that Saturday.

“Unfortunately, practice and dancing inside the Assembly Hall doesn’t match the swirling winds and the distance one needs to cover on a football field. After my first split jump, I headed downfield. After the first spin, I realized my headdress hadn’t been tightened enough. As I was doing the downfield dance, it was practically covering my view and hanging halfway off my head. I attempted to rearrange it a couple of times but couldn’t get it back to normal.

“So there I was, at the 50-yard line with my arms up and half of my headdress draped over my face, only able to see out of one eye. I could actually hear my family and friends laughing under the ‘Hail to the Orange’ because they knew exactly what had happened.”